A simple guide on how to start your social media marketing

How the right content marketing plan can transform your brand

It’s time for your monthly marketing overview, packed with facts, figures, research and industry updates to keep you abreast of some of the key movements that will help you more easily navigate the fast-moving landscape of online marketing. From algorithmic SEO and Adwords CTR studies to NPE and political campaigning, we’ve got you covered. Enjoy our February marketing overview – comments, thoughts, and ideas are always appreciated.

There’s a growing body of evidence demonstrating that companies with the strongest brand awareness, and a favourable public image, are now ranking better than companies with better algorithmic SEO! This is part of Google’s trust us campaign trying to battle sites that ‘game’ the system and giving people more of what Google thinks they’ll want. One of the biggest changes that is useful for marketers and brand managers, is the relevance of social media articles when Google considers whether a brand is important for users. There’s no debate about it now; the more social media articles that are written about a brand, the more Google will favour your company in SERPs.

There are around 5.6 billion searches conducted on Google every day! This equates to around 2 trillion searches every year and this is met with a huge amount of content with around a billion blogs. When you use the search term – “what is digital marketing”, there are only 11,300 global searches a month but an enormous 665,000 pieces of content. One of the ways to cut through the noise is Adwords, yet the language we use and how we position the answer to someone’s search query is everything. A theme across campaigns that currently garner the greatest CTRs is when marketers choose to change their strategy from product solutions to education. This is all about giving value as an Adwords strategy to encourage brand awareness and positive sentiment. There’s more value for the customer and at the same time, there’s a greater possibility that when the customer comes to purchase, you’ll be their product solution.

It appears that time on site can be a much more weighted and powerful algorithmic metric than backlinks. I’ve seen this recently in a live study that showed how in a few hours you can reverse a website’s ranking with another website’s SERPs by using TOS (Time On Site)  on both sites over a few hours. One study used 500 individual IPs to go on one site at the top of the Google listing for a specific search query and click straight off whilst clicking on the fifth search result and sticking on it for a few hours. The SERPs listings switched! From Google’s perspective, they’re equating good UX with the time on site metric, (obviously not thinking that there are some advanced SEO practitioners that can use this to game the system). 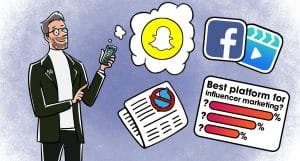 Longform videos on IGTV are becoming a strategic push for increasing followers – three to five-minute videos are boosting engagement levels. A really simple tip that has resulted in engagement rates increasing by a factor of ten is enabling the ‘Post a Preview’ option. Something else that might seem far too simplistic to give real results is asking people to double-tap with a picture of the heart somewhere within the image. You won’t believe how much this increases post engagement! 50%!!! Followers may get sick of this if the frequency is too high so try not to overdo it.

Earlier this month, the platform launched ‘Here For You’; a mental health resource for users. This section appears when users enter the types of words that could imply the user may need help with health and wellness issues. The section includes links to resources from mental health experts, as well as content on Snapchat which is designed to help users cope with mental health problems. Given the significant role that social platforms now play in our lives, especially among younger, more impressionable users, it’s good to see more action is now being taken to better assist those who are struggling with issues by guiding them to relevant resources. The function is available in the States and is yet to announce a global rollout.

Snapchat has also launched a swipe up to call function for advertisers, beginning in the US for now. This function has been designed to drive direct phone calls from the ads in-app. I think this is a long overdue CTA. Whilst research demonstrates that over a quarter of modern mobile phone users rarely use their phones to make calls, we can easily see how this could be extremely useful within particular sectors. The swipe up prompts also include website visits, app installations, long-form video views and text my business (something that could be very powerful in B2C markets).

It now has 335 million monthly active users and surpassed $1 billion in revenue last year. Unlike the other platforms that have seen fast rises and falls in users, Pinterest demonstrates consistent gradual growth year on year. New markets where growth is beginning to accelerate are in the UK, Germany, France, and Italy. Unlike TikTok and Instagram, Pinterest is yet to really expand in the East Asian markets, although over the last year, Pinterest has outpaced Snapchat’s, Twitter’s, LinkedIn’s and Facebook’s growth in monthly active users.

Facebook has launched another new app via its NPE (New Product Experimentation) team. They’ve been building these challenger apps since 2015 to compete with other platforms by trying to improve the user experience and offering some innovative ways of engagement. Hobbi is somewhat like Pinterest, so good timing considering Pinterest’s steady and strong growth year on year. Within Hobbi, you sort images of your hobbies and interests into boards to demonstrate your progress of learning or developing your skills in cooking, DIY etc… I particularly like this app as it’s less about showing off and just being visible, and more about developing skills. You can also create highlight videos of your projects to share with friends and family.

Shopify has announced a partnership with Libra; Facebook’s challenger cryptocurrency. Shopify has suggested that this may make payments and the process of purchasing a lot easier through its platform. This could also be an advantage of making payments through Facebook easier too! It’s an interesting time for the project considering that most of the initial partners in the project pulled out, including eBay, PayPal, and Visa. The US government has even been trying to block the launch supposedly around fears of Facebook becoming too big, yet the truth could be around the devaluation of traditional monetary systems. With Facebook Pay and WhatsApp Pay both moving forward with full force, it seems like a natural progression to be able to own the complete marketing and payment ecosystem.

Facebook bought the SMS platform for $19 billion in 2014. It is now the world’s fastest-growing communication app. Over half a billion people around the world are now regular, active users. There are more than 700 million photos and 100 million videos sent every single day. It currently has more users than Instagram, LinkedIn, Twitter and Pinterest combined. It also has a 98% average open rate. This makes WhatsApp the most engaged marketing channel on the planet. WhatsApp currently gets 40% more positive responses than text message marketing and phone calls. It has the fastest buying consumer demographics too with 71% of users aged between 18 and 44. A brand that’s demonstrated WhatsApp’s effectiveness is Colgate. They invited people to send selfies of their smile via WhatsApp, to a number displayed on the toothpaste pack. The buy-in was a chance to be styled by a celebrity stylist.

With all the corruption of audience manipulation in the political sphere, you’ll be surprised to learn that regardless of all the new sanctions and anti-fake news campaigns, Facebook is still the main medium for political advertising. Democratic presidential candidate Mike Bloomberg was reportedly spending more than $1 million a day on Facebook ads and was also working alongside a group called ‘Meme 2020’, to create memes to help boost his message across Instagram and other platforms. What do you think? Should politicians be able to spend mountains of money on political social media campaigns, and what does this mean for the democratic process?

The platform has begun testing a new notification tag to highlight identified misinformation from government officials. This is an incredibly interesting function because it could essentially highlight every time a politician tries to use misinformation to lead the public in a particular direction. The platform is also considering introducing large tags to harmfully misleading information with links to reference materials. This could be a real game-changer for political campaigning and Twitter ads that target certain demographics with misinformation. After the 2016 US election, researchers found huge, inter-connected Twitter bot networks, the largest of them incorporating 500,000 fake accounts boosting the visibility of specific messages. The more you know.

For all you gamers, you’ll be very acquainted with Twitch. For those reading this marketing overview who aren’t, it’s a mixture of YouTube Live and Facebook, owned by Amazon, and is designed specifically for gamers to stream and share their adventures. People streaming can receive direct payments from their followers and viewers while they stream. It’s now estimated to boost its regular viewership by 14% to 37.5 million. Its growth trend looks as though it’ll hit 47 million viewers by 2023. Its current growth is the strongest among live streaming platforms although it appears that competitors such as Google’s YouTube Gaming, Microsoft’s Mixer and Facebook Gaming will be investing massively to compete. Marketers can participate with direct sponsorships of streamers or by buying ad space. About 80% of Twitch’s audience is male, and 55% are 18 to 34. Media buying within the platform is on the rise and brands such as the NFL have signed further contracts with Twitch to reach its audience.

The online marketing sector moves at a breakneck pace, if you blink you might miss something important, and that’s where we come in. When you follow me on LinkedIn you’ll see my daily updates and news, as well as a marketing overview each month. If you want to stay fully ahead of the field I recommend subscribing to our Mantra monthly newsletter to learn about regular developments in our industry, clients, stories and also about the wider world of Mantra Media.

Keep up with every marketing overview to stay ahead of the curve and in-the-know. When you need to improve your brand awareness, tighten up those client acquisition funnels and have a more coherent approach to your marketing, work with us at Mantra Media. We have an unparalleled track record, supporting both new and established brands to reach their campaign goals. I wonder if we could help your business go further faster?