A simple guide on how to start your social media marketing

How the right content marketing plan can transform your brand

In an era of extreme polarisation and more controversy surrounding social media platforms than ever before, I didn’t quite know what to expect when meeting the team at LinkedIn Japan. Would it be a big impersonal operation where employees never left their trenches or a warm and collective environment you’d hope for from a young tech-forward business? What kind of culture would I see?

The importance of culture, creating it, maintaining it and improving it, is often spoken about on social media, at conferences and in networking groups. As many organisations grow and become larger entities, we often find that any semblance of culture is overridden in favour of the misinterpreted mechanics of extreme productivity to a point of ignoring the humanistic elements needed for a business to create a happy and conscientious work environment. This often comes down to the values and drivers that cascade from the top levels of management, are we talking pure passion or profit, where’s that fine line? A big subject so I’ll leave it for another time but it does lead to the question of where such a large entity like LinkedIn appears on the cultural scale.

LinkedIn Japan is housed in one of the most exclusive office spaces in central Tokyo at the Marunouchi building. Passing through layers of security to be led up to the elevator to the 34th floor ‘the exclusive suites’, I pass a beautiful floral presentation and wait at the floor reception overlooking the beautiful neo-metropolis of downtown Tokyo. 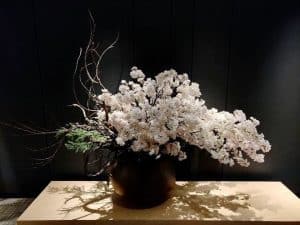 I was welcomed by the senior news editor of LinkedIn Satoshi Ebitani, an incredibly personable, warm and conscientious professional with a rare, infectiously joyful smile that reminds me of my business partner (the happiest person I know). This was the second meeting I had at LinkedIn in the past couple of weeks and I was excited to explore the future of LinkedIn and to further develop a relationship that will be positively mutually beneficial. There are many positive things you notice in the offices of LinkedIn Japan but the one that stands out more than any other is the feeling from the team; the independence, sense of collectivism and joy that everyone I met had in their roles. There’s an obvious excitement among the team, incredible employee benefits (some tasty ones I’ve brought back to Mantra) and a theme of, ‘this is for the users’ and unlike most other social media platforms, LinkedIn seem to be extremely invested in the local business community and in creating mutually beneficial partnerships. Satoshi’s joyful personality exudes excitement for the businesses he writes about and promotes throughout the current 2 million LinkedIn members in Japan and it’s obvious where the platform is going. LinkedIn is investing a lot in Japan right now as it is seeing the huge growth potential.

We predicted this at Mantra about three years ago, and began delivering LinkedIn training courses in Kyoto for people wanting to become digitally savvy to raise the visibility of their businesses and personal profiles. These were incredibly productive training events involving business owners, university lecturers and government bodies. I was recently contacted by one of these students, Yuki Sasaki. She excitedly wanted to tell me where she’d got to since receiving her training. She told me of how she’s now delivering training seminars from the offices of LinkedIn Japan. Such a fantastic achievement and what a coincidence! Many of my Japanese students have gone on to create opportunities for their current businesses and have also gone on to develop new ones from the training we delivered.

LinkedIn may be a behemoth in size and influence but it has managed to maintain a startup like culture that’s extremely agile and collectivist in it’s a approach. This goes to show that even with great size, with the right culture, businesses can still produce high productivity by giving their employees all the right support they need to succeed.

Author notes – I’ve been a huge advocate for LinkedIn since the platform first launched in the U.K. Strategically it has become an indispensable component for all businesses wanting to professionally develop their online visibility. There are no shortcuts. If you want to increase meaningful visibility with your prospects and connect with those that matter most for your growth, you’ll need to apply a diligent and proactive approach. If you don’t want to reinvent the wheel, work with us at Mantra. We’ve supported new and established businesses, from sole traders to multinationals across the globe. For a free LinkedIn profile analysis contact us or directly over LinkedIn.